A downloadable game for Windows and macOS

The Super Science Friends got its start as an animated series on youtube! They are a team of super powered scientists who travel through time fighting nazi clones, space ghouls and their own scientific rivals. Never seen it? Click here to watch the episodes for free! And support the game on kickstarter!

If you find any bugs, please use our bug report so we can make a better game for everyone :)

Due to a time paradox Adolf Hitler is back from the dead and has gathered all of the super villains together to kidnap the Super Science Friends! It’s up to Einstein to rescue them (and unlock them as playable characters)! Fight your way through 12 awesome levels each taking place in a different period of time (and space). Defeat classic Super Science Friends villains like the Soviet Space Ghouls, Thomas Edison and more!

Unzip the downloaded file and run the executable.

I will pray for developers to read this, but guys you really should update game for macOS, I rlly wanna play it :,)

When they will release a more complete game? I'm ansious to play a new chapter

Reply
Big T Hobbies4 years ago
A fun beat'em up with a sense of humor?  This is the way to do it.
Reply
Charlio-Chan4 years ago

Can you also make a way to edit the controls? I can't use the arrow keys. Mine are not owrking.

Can you also make a way to edit the controls? I can't use the arrow keys. Mine are not owrking.

Love the cartoon so much, I hope the games is just as good!

Hi :p I made a video on your game! I haven't watched the series yet, but I plan to! I really hope you like the editing and the big reference I made :)

Loved the series, I don't like side scrolling beat-em-up, but I enjoyed this demo. Beating nazis is way too easy yet, I hope they increase the game difficulty and the interaction with the background.

AMAZING!! LOVED IT!! And on the same time finding this amazing demo I also found this amazing series!! I will absolutely back this project!! Can't wait to see more and to beat more nazis to death!!

So this game introduced me to the show and for that I am thankful. The universe, story, characters, references and overall brilliance of the show already puts it among my favorites. That being said this game, even knowing it is only a demo to raise awareness for the crowdfunding campaign, seems generally lacking. The strongest point would easily be the introduction animation but after that it quickly falls into a pretty generic side scrolling beat-em-up full of references to the show. While the story alone makes me want to explore what the game has to offer, the bland action and minimal mechanics make it seem like it would just be a chore. Understand that this all player feedback in hoping to see some improvements in the full release. Seeing as the main focus of the game is combat, making it more in depth and interesting beyond press "S" until thing dies or wait til opening and press "S" and repeat until thing dies. All of these characters have amazing abilities in a fictional world and reserving that to only a single button press after charging a meter seems like a huge missed opportunity. Regardless, looking forward to seeing what becomes of this title and excited for more of the show!

you said they should fix the combat, but gave no examples. How I would do it is have 2-6 buttons, having a punch, kick, and power trigger no matter what. Maybe having it be 2 player, with Churchill being a second starting character (he's useless without his team, and they broke the clock tower)

Churchill would be slow, weak, and with low health, but his military background has him using a pistol, and grenades, which the science trigger reloads.

Einstein is weak, kind of fast, and with low health, and short reach. Once you press the power trigger, he becomes almost uncontrollably fast.

Freud is pretty average, but his power trigger has to be held in order to work. I doubt I need to explain what it should do.

Tesla goes slightly slower than Einstein's relaxed speed, is a bit stronger than him or Churchill, has the same health as Freud, as well as the same default reach. Once you hit the power trigger, his punch becomes a chain attack, and his kick becomes a stunning projectile. This is based on a "battery", and is charged by action in the powered down mode.

Darwin is the same as freud, but his power briefly stops play, like a super from streets of rage, and has the player make a choice with the movement buttons.

Up: gorrila, strong, but slow.

Down: horse, fast, but inactive attack (at least in front)

Left: wolf, fast, but without a kick.

Cutie is a bit slow thanks to the dress, beyond that she's about the same as Darwin and Freud, but with a bit more health, and a slower kick. Her power trigger gives her a radius attack in place of a kick, and changes her punch to orbs that pierce. Using these drains her health, though.

Taputti is a large target, but can attack multiple targets at a time with her scythe. Her trigger only works on males, and 3.87% of females.  She can only use it after a idle animation, which is her making it.

How's that for the programmers?

How's that for the fans?

How's that sound to play?

Wow, yeah. Love all of those examples. I suppose my biggest worry for the game is that all characters are going to play almost identically, with a standard attack that can combo and a special move that is related to their abilities.

Considering we have either a keyboard and mouse, just keyboard or a gamepad to work with, it would make sense to me to overall, make more use of the buttons or combos available.

If it were button based (A S D C, A B X Y, etc.) I can see something with an ability cooldown system where everybody has specific abilities that fall into categories, direct attack, area of effect, conical and defense, maybe. With a specific "super" that would charge based on attack combos. All in addition to a basic attack that would have no cooldown, or only have to cooldowns and if you don't ration them well you're left with no offense for a bit.

I like all the examples you gave and they would all certainly work just as well, the power button definitely sounds like an interesting concept but I would wonder how to implement directional triggers in a game that also has a Z axis. (Edit: you already covered that one)

Fun game, I can't wait to play with the other SSFs. Especially Tesla and Marie Curie. :) 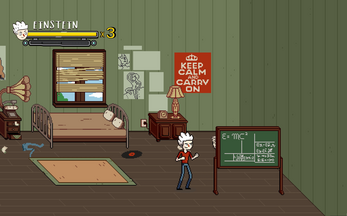 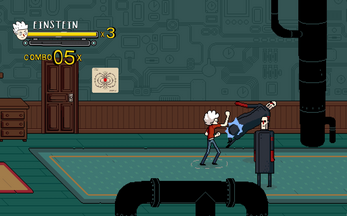 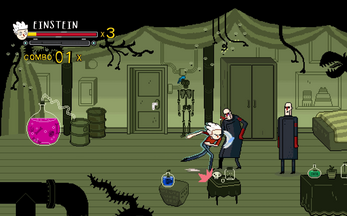 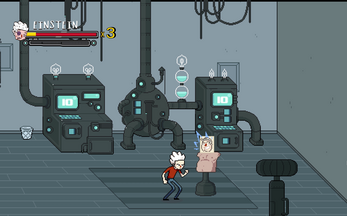